we love Santa mail around here....

Everyone loves letters to Santa... 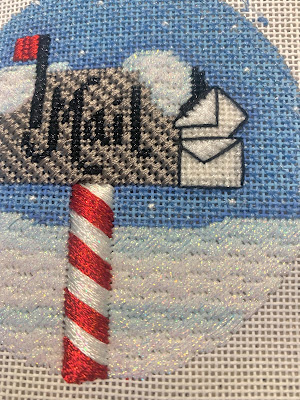 Hard to photograph but you get the idea.  I used only stash threads so my gray Neon Rays mailbox is a little darker than I had intended but I wasn't about to rip it out and start over (even though I do that more than anyone out there!)... 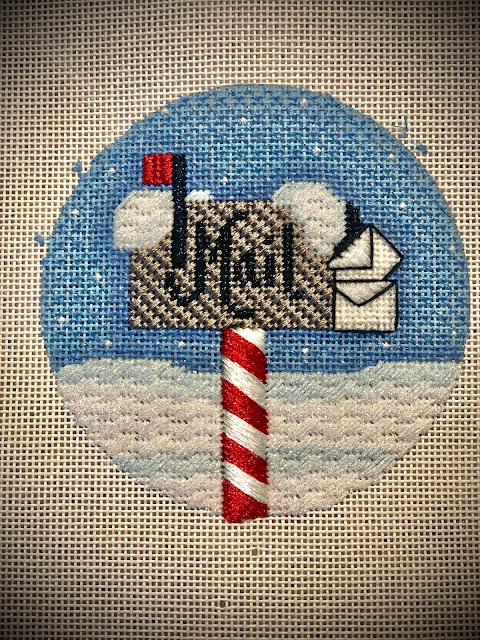 No comments:
Email ThisBlogThis!Share to TwitterShare to FacebookShare to Pinterest

A birdie and her snow friend

This little cutie was super fast and fun!  I hope you have this in your stash.

Instead of the usual "snow", I used clear seed beads to mimic ice - even covered the berries in ice at my daughter's suggestion and I'm so glad I did. 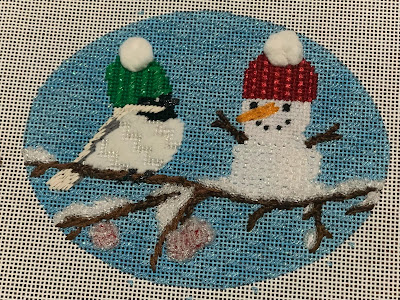 The snowman has a basketweave face using Snow thread and Double stitch with beads for the body. 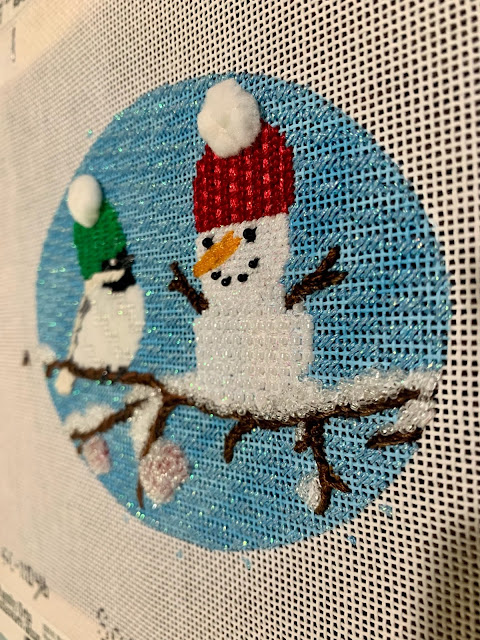 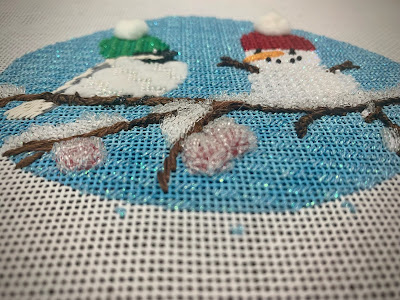 The wrapped stem stitch branches turned out pretty well also....I like it when you can wrap tight and really make it look like a branch or piece of log.
Overall, this was easy and fast......and FUN! 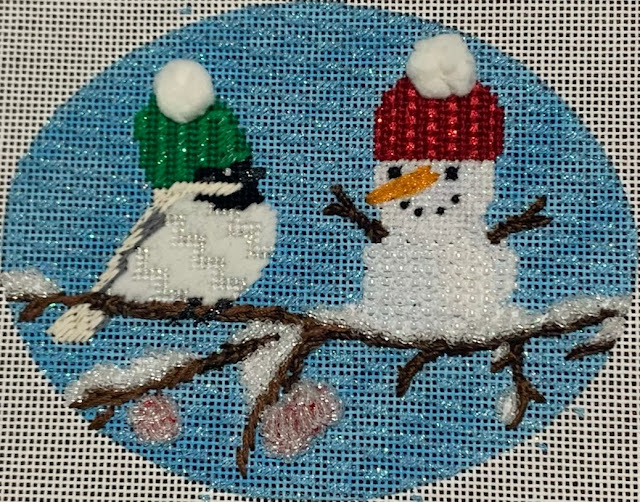 This last in our nutcracker set ended up being a surprising favorite!

I mean....just look at these cute cookies.  I outlined them as though they are hanging in their cookie cutters and it made a big difference.  This red bow turned out well also - was a tricky feat of taming and twisting a piece of sheer ribbon, then tacking it down.
And then there are THOSE BOOTS!  My favorite hands-down.  I used random sparkle threads for the boot ties and the laces are thread-painted covered wire - perfect stash item for this! 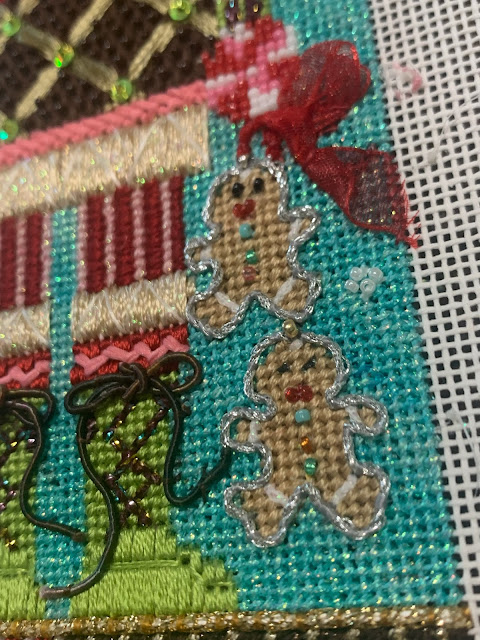 The nail polish trick worked for this cute buckle that just puts this piece over the top if you ask me!
Since the belted area was painted green I think...I had to change it up to use this method so I did Basketweave with red Vineyard Silk for the whole belt (with a white stripe down the center for visual interest) before tacking this sheer ribbon belt down.
And then the "skirt" or whatever you call the lower body garment on a nutcracker - LOL.....
I love beading as you know, so this stitch was a blast: 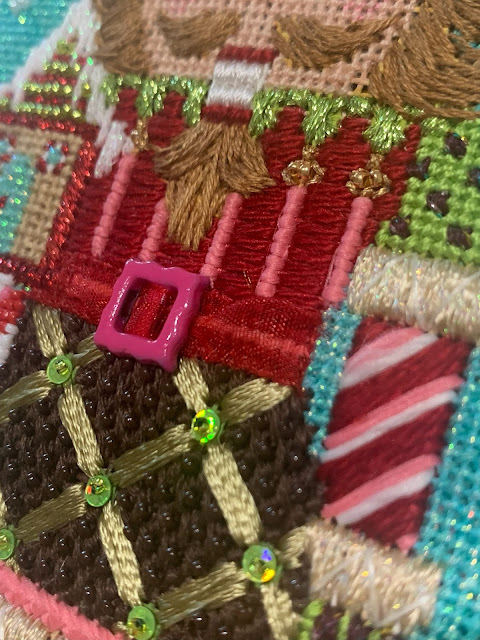 The gingerbread house turned out to be the coolest optical illusion - unfortunately difficult to see in photograph - the beaded roof looks 3D in person! 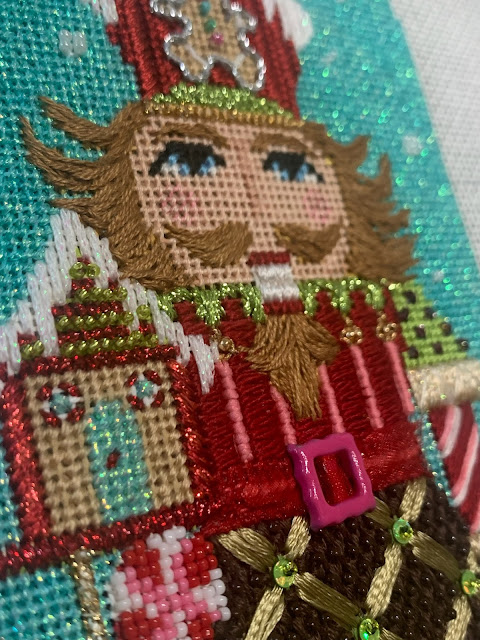 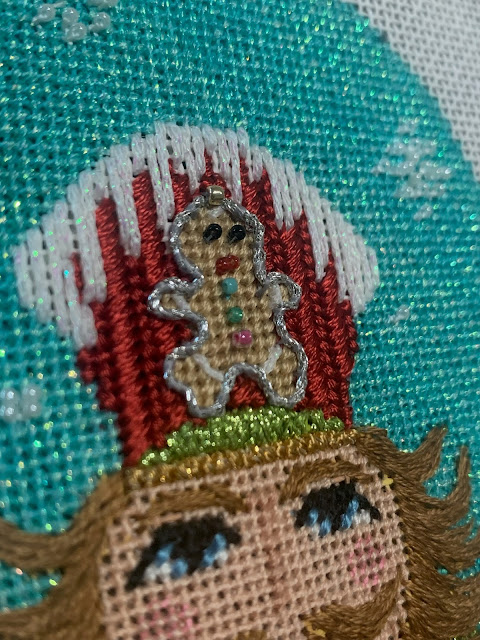 Here's your close up of those amazing boots: 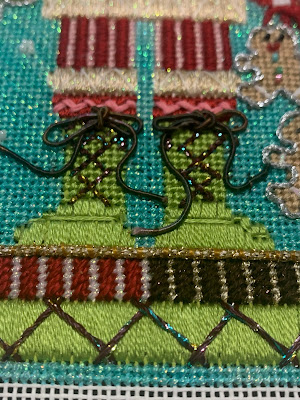 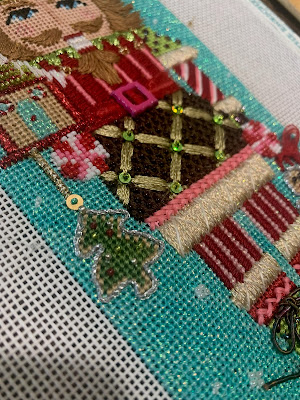 To wrap us up, here they are one more time in their glory:

Hope you enjoyed as much as I did!

No comments:
Email ThisBlogThis!Share to TwitterShare to FacebookShare to Pinterest

Oh my goodness, this one was even more fun.  I absolutely loved stitching the cupcake on his head. And I was super excited to find the candy beads in my stash for the bottom border.

We shall call him "STRAWBERRY SAM". 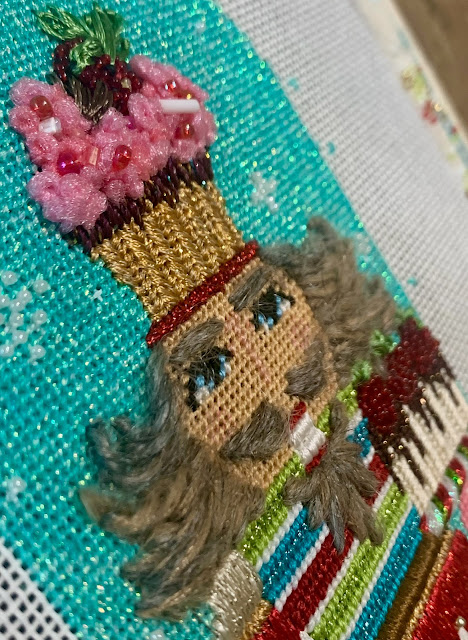 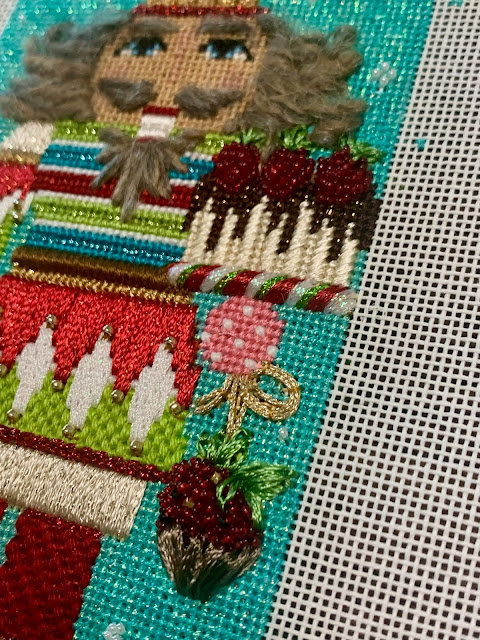 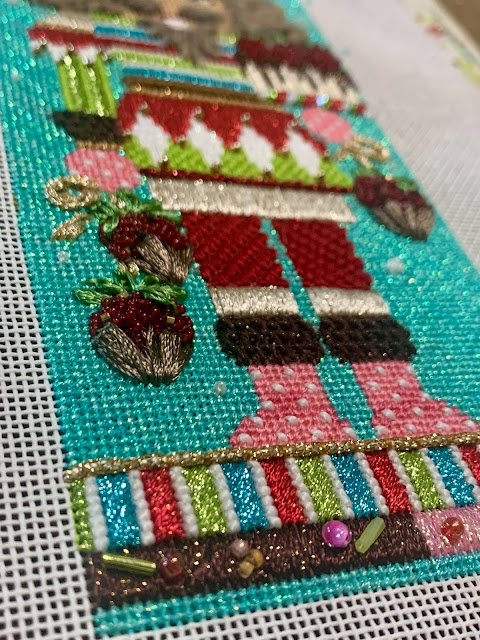 This set was an absolutely scrumptious stash-buster!  I didn't worry about changing shades of any color or types of any thread in that colorway - and it just worked for these guys.
Stay tuned for the third and last in this series..."GINGERBREAD MAN".
XOXO,
Suzanne
No comments:
Email ThisBlogThis!Share to TwitterShare to FacebookShare to Pinterest

And these beautiful nutcrackers are just my cup of tea!  I stitched all three in this series of the same size.  I will show one at a time so you can ogle all of the details.

"Sweet Tooth" is what we shall call the first one:

This piece just had so many fun parts!  My local coffee shop uses the skinny wooden coffee stirring sticks and I knew it would be a perfect fit for the lollipop - too cute!
I didn't have the correct color for the piece of candy atop the cake so I painted a white candy button with Barbie-pink nail polish and clear coat.  I love it! 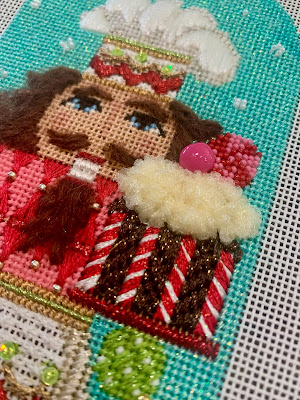 The chef's hat turned out to be one of the best aspects because it gives the guy so much depth - it was super fun to stitch using Flair: 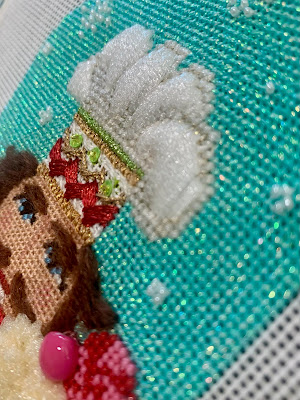 The Epaulette on his shoulder is green bugle beads capped with a gold size 15 bead  - sewn on with beading thread and attached at the top only so that they dangle appropriately: 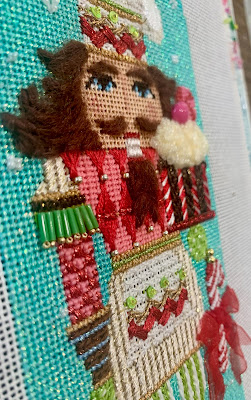 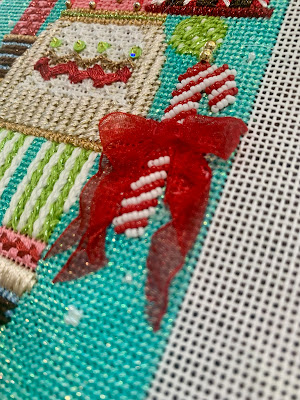 I enjoyed stitching these pieces so much.  Even the background was fun because the sparkle came to life.  I used Threadworx Kreinik size #8 and stitched Basketweave for full but subtle coverage.  I didn't' want something "busy" - I wanted the showstopper to be the nutcracker.  The scattered snowflakes are beaded.
Stay tuned for the next guy in this series..."STRAWBERRRY SAM".
XOXO,
Suzanne
2 comments:
Email ThisBlogThis!Share to TwitterShare to FacebookShare to Pinterest

Thinking Outside the Hat

I had quite the challenge when it comes to this precious Raymond Crawford piece. I've been in a background mood lately which is just where my challenge began. I took a whack at an irregular Bargello for the stripes thinking maybe I could make it look like wallpaper...but instead, it ended up looking too spider-like...

I knew I wanted to keep the softness of the Very Velvet, so I pulled out the irregular and decided on a more traditional bargello, which was already better...but what about the hat? I didn't want the words to be lost, nor the cute little pom up top look like it was floating there above.

Until it hit me, the "HO HO HO" as Santa's hat is different from a "HO HO HO" within Santa's hat. I tried....I really did...until I decided to heck with it - I've gotta have a hat so I don't lose the cuteness and whimsy of the artist's intent within the striped background! So I took a straight edge from brim to pom on each side and alternated one row of tent stitch and one row of satin stitch (over two) as a more official, grounded Santa Hat. The Neon Rays + gave it a little sparkle and allowed the whole piece to really come together for me. 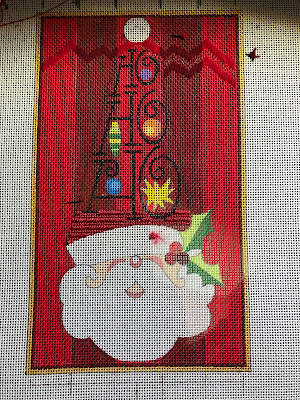 On the brim and pom, I used a stitch from Mary's Whimsical Stitches, Vol. 2 (page 227 if you have it and if you don't have it, I recommend it highly) called "Diagonal Stripes over 3 with Accents" using Arctic Rays and Size 11 beads. Typically on an 18 mesh canvas, one would use a size 14 or 15, but I felt like this particular hat needed the space and dimensions between the rows.

Santa's beard is stitched in Glisten (quickly becoming one of my new favorite threads). I particularly love how in certain light and at a certain angle, it looks like hidden "S" (This stitch was from Stitches to Go). 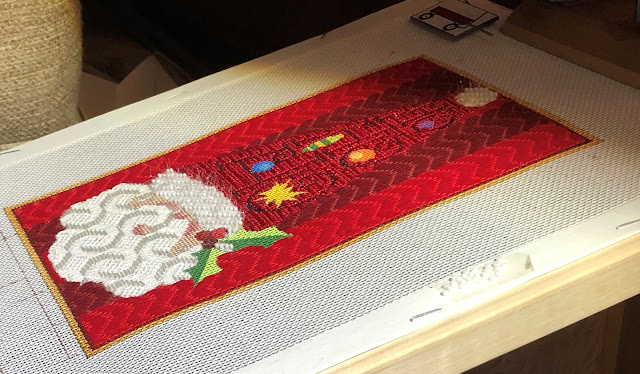 As for the HO HO HO, I used a couched black metallic chain to make it pop up off the canvas.

The berries are wooden beads wrapped in Flair and I hand stitched the two colors of green felt together, as painted, for the leaves! 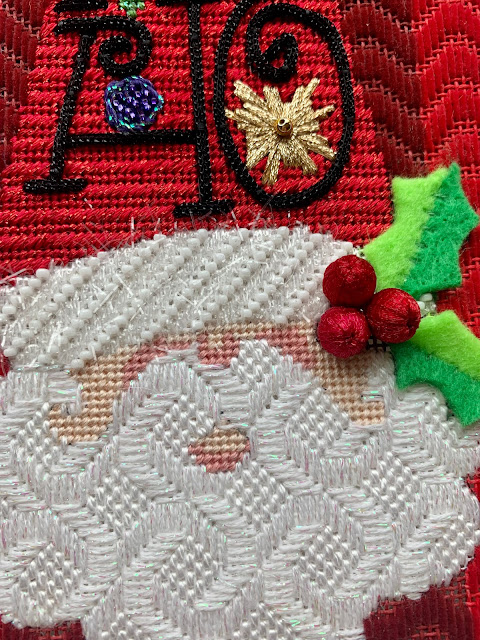 Here is the finished piece.  This Raymond Crawford piece turned out super cute! 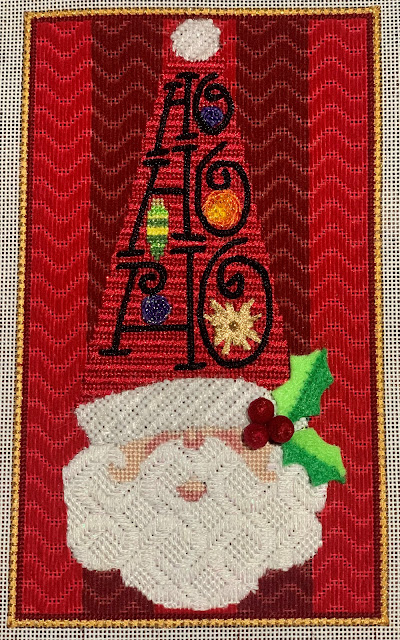 5 comments:
Email ThisBlogThis!Share to TwitterShare to FacebookShare to Pinterest

Where Did February Go?

Here's where mine took me: 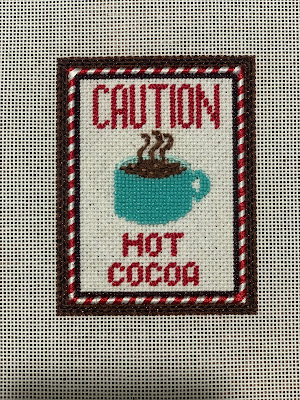 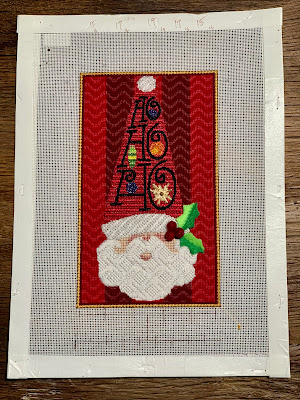 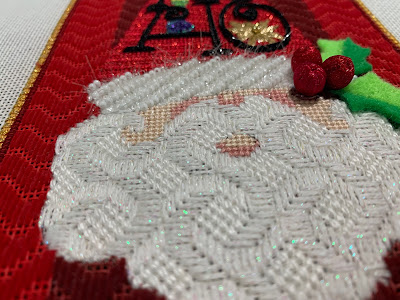 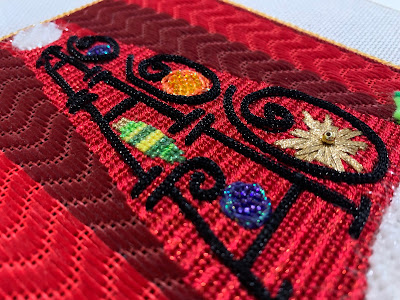 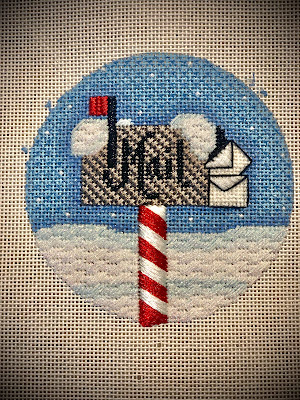 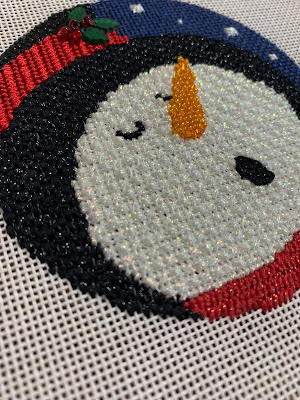 I guess you could say I've been stuck in December-ary! As my daughter and I play cards by the light of the last fire in our hearth for the year, I'm excited to spend more time seeing...and stitching! the blooming flowers, singing birds and glowing sunshine in the coming days of Spring! Until then...
XOXO,
Suzanne

Picture of the Week

With my daughter and her co-stars at their screening in LA!